Petra László, a news journalist reporting on the massive influx of Syrian refugees into Europe has been fired after been filmed assaulting fleeing Syrians persecuted by war. The reporter, from news channel N1TV, was there to shoot a group of Syrians running away from police officers. She can quite clearly been seen kicking a man carrying a child in his arms who runs in front of her.

László’s employer, N1TV, are associated with the far-right Jobbik party, who oppose the wave of Syrian immigration into Europe. But she foregoes her duty to remain impartial and distant by involving herself physically in the disturbing incident. She sticks out her leg out in front of the running man, causing him to fall straight on top  of the child he was carrying. He instinctively turns back to remonstrate with her as she continues filming. 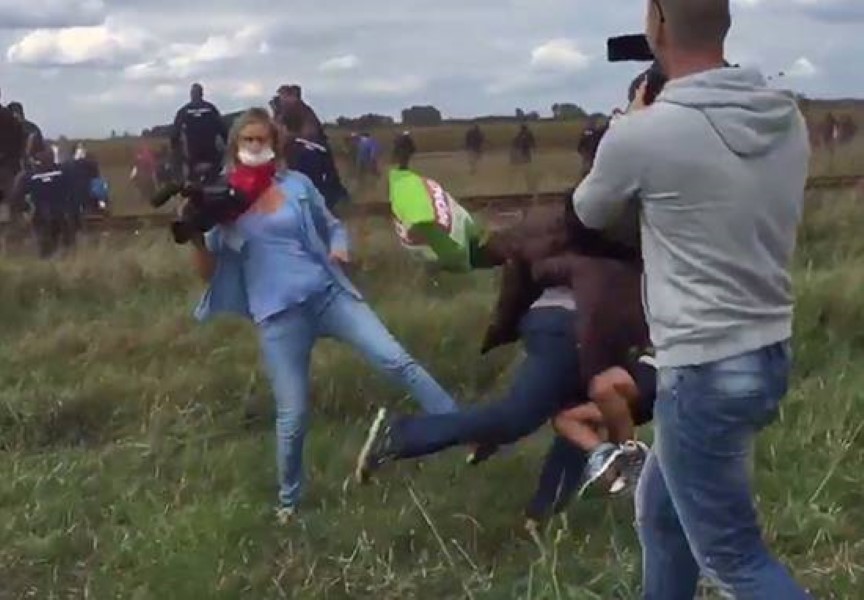 The Syrian refugees are fleeing their homeland after more than half of the entire’s country has been left without a home due to the ongoing civil war and constant terrorist atrocities. Many have come to Europe, where countries such as Germany welcome them for political asylum. Hungary is their route into such other countries, but deep disdain for immigrants has caused incidents such as these.

Toddler Twins Pretend To Be Asleep When They Hear Their Mom Talk!

Twins eh? Double the trouble and half the time to deal with it! As...
Life Hacks

He Held His Key Over a Flame… Now He’s Never Going To Be Locked Out Again!

Keys can be tricky to keep hold of, can't they? Along with cellphones, they're...
Life

I Was Shocked When I Saw A New York Metro Passenger Filmed Doing THIS To A Homeless Man!

A big-hearted stranger was secretly recorded doing something amazing on a New York City...
Science

A heart-rendering picture of a poor newborn baby born with one eye has been...