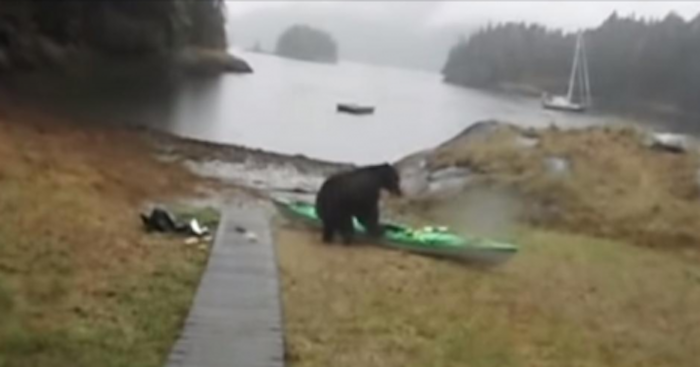 Berg Bay, Alaska. Mary Maley is taking a lunch break in a cabin during a solo kayaking trip around Alaska, when she notices a black bear out the window. Instead of just staying in the cabin, marveling at the majesty of such a creature, Mary decided to go outside and pepper spray – yes, pepper spray – the bear. Bad move.

Unfazed by the woman’s attack, the bear decides to take revenge by destroying the thing most important to her – her canoe. Cool as you like, he strolls down to the kayak and starts to gnaw on it, piercing the vessel in multiple places.

In the hilarious video, we hear Maley pleading with the bear to stop destroying her canoe, and apologizing for pepper spraying him earlier. However, it appears that the creature doesn’t speak English. No matter how many times she cries “bear stop that!” (and it’s a lot), he just continues to chomp on that delicious plastic kayak!