More
HomeNewsThis Homeless US Marine Sits Down At The Piano And Shocks Everyone... 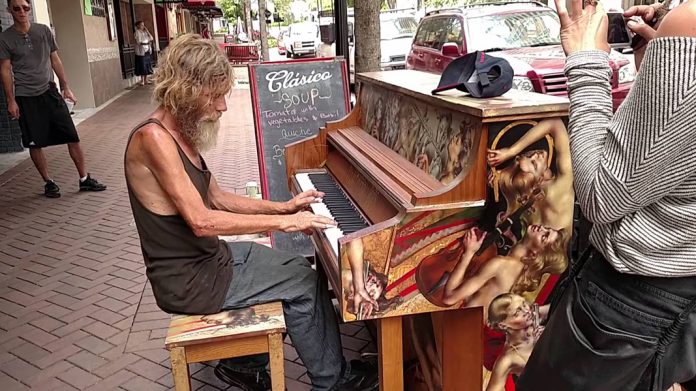 Meet Donald Gould. He’s a homeless man from Florida. Donald used to be a US Marine before life took a turn for the worst and he ended up homeless on the streets. As well as serving his country, the 51 year old veteran took the time to learn and become something of a wizard on the piano. In this heartwarming video, Donald sits at one of the street pianos in his home town and amazes passersby with his musical talents. He plays Styx’s ‘Come Sail Away’, and he absolutely nails it. The woman watching him is amazed.

“It is my passion. I just like to make people happy out there when I’m playing,” Gould a local Florida news station. “I put my hat out there and sit it on top of the keyboard in hopes of making tips because I’m homeless.”

Since this video appeared on the Internet, it has quickly gone viral. That’s good news for Donald, as kind well-wishers have started up a fund to help him get off the streets. Donald currently teaches kids to play the piano for free, despite needing money and living on the streets. Thanks to the generosity of strangers, Donald may soon be teaching a new generation of musicians to play the piano from the comfort of his own home. We hope so. You deserve it, Donald.

This incredible dashcam footage shows just how easily a crash can occur when a...
Featured

The Entire School Turned Up For This Teacher’s Funeral. When They Did THIS My Jaw Dropped

When Dawson Tamatea, a popular gym and math teacher at Palmerston North school in Wellington,...
Family

When He Sees His Bride Walk Down The Aisle? The Most Beautiful Reaction EVER!

Weddings can be emotional events, can't they? And it's easy to see why. Two...
News

Footage of a bizarre road traffic accident from Russia has emerged, showing what happens...