More
HomeHealthIndian Holy Man Claims To Have Gone Without Food And Water For...

Indian Holy Man Claims To Have Gone Without Food And Water For 75 Years. Confirmed By Doctors!

An Indian holy man has claimed that he has not eaten or drunk anything in 75 years, and has the medical evidence to prove it! Prahlad Jani, 83, who lives in a cave near Amba Ji Temple, claims to have gone without food or water since the age of 7. Prahlad says that he made the decision to permanently fast after being visited by 3 Hindu goddesses:

“Three goddesses appeared to me and bade me to follow. Ma Kali, Ma Lakshmi, and Ma Saraswati. I consented, prepared myself, and asked: ‘What about my food?’ They each put a finger on my lip and said ‘You need not be concerned about food ever again’. I was 7, and from that day I stopped eating and drinking.”

Since the blessing, Prahlad says that he has been sustained by nectar that filters down through a hole in his palate. 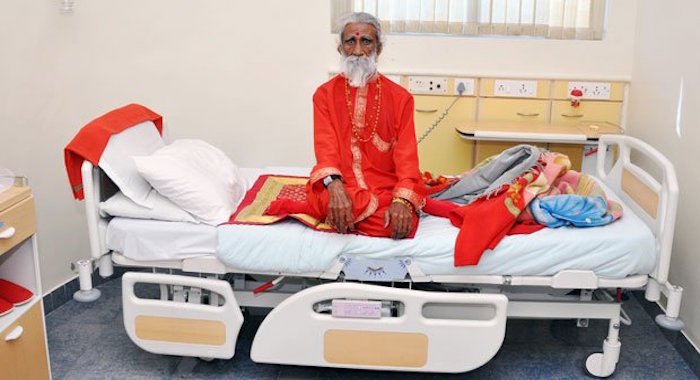 Now, his claims have been put to the test by a team of doctors at Sterling Hospital in Ahmedabad. The team kept Prahlad in for three weeks, carrying out a number of tests and monitoring his behavior closely. Their observations determined that he had not consumed any food or water in the period that he was in the hospital.

But how? Neurologist Dr. Sudhir Shah stated that “We believe that Prahlad Jani’s body went through biological transformation as a result of meditation and powerful yoga in the completely natural environment that he stays.” The specialists believe that Prahlad is producing a nectar through his Amrita Chakra (third eye chakra), which he uses for sustenance. They also discovered that his brain more closely resembles that of a 25 year old, rather than that of an elderly man.

Watch a video about Prahlad, including interviews with the doctors who examined him, below:

She Heard A Man Scream, And Soon A Stranger Was Dying In Her Arms. All She Could Do Was Pray …

When this girl went to her local store, she never expected to hear the...
News

Now, we don't know about you, but we don't watch all that much Danish...
Social Experiments

How do random strangers behave when you put them in certain set-up situations? It's the premise of...
Life

Few would think that there were any philosophical underpinnings to martial arts. It's just...