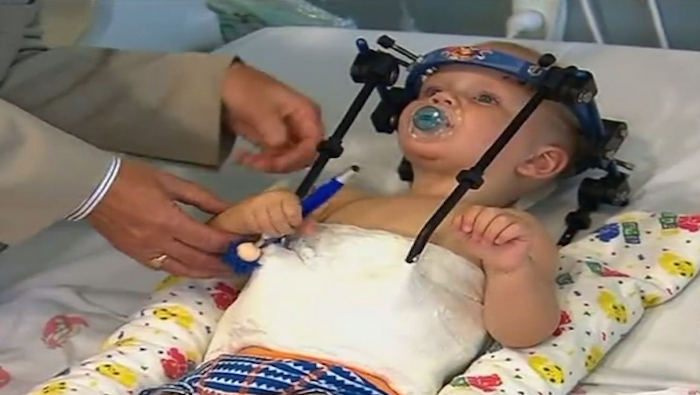 This is Jackson Taylor. Recently the 16-month-old Australian was traveling in a car along with his mother and 9-year-old sister when they collided with a vehicle going more than 70 MPH. Little Jackson’s chances of survival were slim. As a result of the crash, Taylor suffered an “internal decapitation” meaning his head was severed from the spine underneath the skin.

Paramedics rushed to the scene, and airlifted the little boy to a hospital in Brisbane, where he endured a six hour life-saving operation. Dr. Geoff Askin, Australia’s “godfather of spinal surgery,” headed the team of surgeons who carried out the complex operation. The procedure involved using a piece of wire along with part of Taylor’s ribs to reattach the vertebrae.

Jackson is now recuperating, but is expected to make a full recovery. Askin told Australian media that “a lot of children wouldn’t survive that injury in the first place, and if they did and they were resuscitated then they may never move or breathe again.” Jackson’s recovery was nothing short of miraculous.