More
HomeEntertainmentZac Efron's Been Training With The Rock... Now He’s CRAZY Hench And...

Zac Efron’s Been Training With The Rock… Now He’s CRAZY Hench And Looks Like THIS! 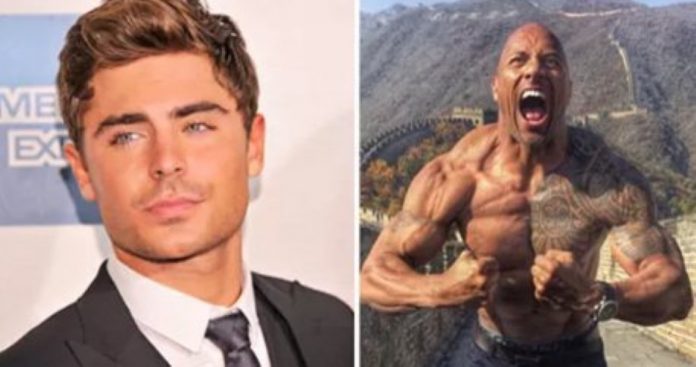 The new Baywatch movie is coming our way soon and, as you might have already heard, Zac Efron is starring in the lead role. His co-star? None other than The Rock himself, Dwayne Johnson. And with Efron needing to bulk up and look hench, there’s no better guy to team up with, huh?!

And it seem that having the former WWE star as a gym pal has worked wonders, only the ex-high School Musical actor is absolutely HUGE now! He’s a total monster…

Hollywood stars get ripped for roles quite a bit, we all remember how big stars like Hugh Jackman and Christian Bale have got for movies before, but this has to be one of the most impressive we’ve seen yet.

Honestly I have a hard time with paparazzi but s/o to this dude 🕶 pic.twitter.com/VYn8CbdsGI

He can even lift tractor tires!

"Blood, sweat & respect. The first two you give, the last one you earn." Learned that from @TheRock #Baywatch pic.twitter.com/pRekrSVhWg

Look at the sheer size of him…

Months of training for this. Bring it on @therock let's do this ALL DAY baby! #NinjaWarrior #Baywatch #nowiresneeded pic.twitter.com/96crwf0aba

He Puts His Hands Around Her Throat And Starts Choking Her. What She Does Next? OMG!

With instances of domestic violence on the rise, as well as the ever-present danger...
Animals

Badly Burned By The California Wildfires, This Poor Cat Has Emerged As a Symbol Of Hope

Wildfires are devastating. We've all seen the terrible and untold damage that they are...
Life Hacks

He Mixes Up A Paste Using a Common Ingredient… Next? The Whitest Teeth EVER!

What do you use to clean your teeth? A toothbrush and toothpaste, right? Sure....
Entertainment

Nickelodeon To Launch New Channel – With Nothing But ’90s Shows!

If, like us, you grew up in the nineties, then the kids TV channel...